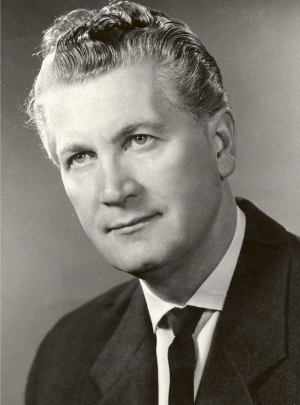 In the fall of 1992 the City of Szeged and the Franz Liszt Conservatory organized a singing contest called "Autumn in Szeged" to give opportunity to all students studying singing to show their talent. The chair of the jury was József Simándy. He prepared for this task with great excitement and precision. I possess all of his notes, critics and advices for the contestants.

He was strict, mostly for himself! But he loved talented young singers very much, in whom he noticed and heard the art and the dedication for singing. It was his idea that it could be nice to continue this initiation to have singing competitions here in Szeged. In the spring of 1998 this very idea became reality. Unfortunately he could no longer live. However since then every second year the singing competition is held named after József Simándy. Thanks to the leadership of the city and all who care about cultivating this tradition.

I recommend some very important thoughts of the Artist, József Simándy:

"The science of singing is incomprehensible! Only the result is sensible by our ears and that is why it is so difficult! The attitude of being an artist is deliverable, great technique too, and the praxis not to disappoint our audience as well. It is possible to draw attention to artistic humility and to make a bow to the genius composed and created music to the divine highs! We do not want to change anything on it, but also fill in our call with humble soul: interpretation and second creation. It is true that we bring the works to live, but we are allowed to this only by the instruction of the composer! We have to know how to put ourselves into the spiritual world of the creator and to the spiritual world of the creation. To do this we need humble spirit. If that is not the case, if I want to give myself, then I go wrong! Who serves the genius with humble soul walks on the absolute path of art!"

Dear Contestants! Be these thoughts are reminders to the artistic career and do not forget the creed of József Simándy: "SING WITH JOY!"

I wish to the teachers, to the repetiteurs and foremost to the contestants to have a great time here in Szeged, in this beautiful city. I wish a good and responsible work to the jury and successful performances to the young singers!

I hope that this tradition will live to the memory of our acknowledged and honoured artist, József Simándy!

József Simándy was born on September 18, 1916 in a small rural Hungarian town called Kistarcsa. After graduating high school he worked as car mechanic until the fall of 1939. The former City Theater contracted it as a "chorus actor" and one year later he sang in the choir of the Opera House.

Between 1943-1946 Simándy was student of Dr. Ferenc Székelyhidy at the Liszt Academy of Music in Budapest.

Viktor Vaszy contracted him as a soloist with the Szeged National Theater Opera Company in 1945. In the spring of 1947 he was hired by the Hungarian State Opera as a guest artist and then became member of the company. Apart from Turiddu and Don Jose, in a few years the audience has seen him in the following roles: Lohengrin, Gabriele Adorno, Vladimir (Prince Igor), Radames, Walther von Stolzing, John (The Barted Bride), Manrico, Young Bachelor (Kodály: Szekler Spinner), Rotarides, Don Carlos, Duke of Mantua, Lensky, Riccardo, Erik, Bánk bán, Florestan, Tamino.

József Simándy received the Kossuth Prize in 1953, the Meritorious Artist Award in 1962 and the Excellent Artist Award in 1964. He retired in November 1973 but continued to perform frequently until the farewell performance in 1980. He died in Budapest in 1997.